The Clears with Mercy Ships

After a busy few weeks at home in the UK over the summer and then ship yard in Gran Canaria, we arrived with the ship in Conakry, Guinea in early August. Stuart and I are excited to be back in Guinea, as it’s the first country we served in as newlyweds back in 2012. We’re interested to see how the country might have changed, with all that’s happened here since then.

It’s always very busy initially when the ship arrives in a new country, setting everything up, and screening for potential patients. We had one major evaluation day where over 6,000 people were assessed. I (Frances) was privileged to be part of the screening team last time we were here so I know what a challenge it is to see 1,000’s of people who are in need of help. It’s comforting to remember that God knows every one of them by name and is with them, even if we can’t perform surgery for them. What may not be possible with us is possible with God!

People lined up outside the Palais du Peuple to be seen by one of the screening nurses at mass screening.

Missy Brown, OR Manager, talking to a potential patient at the mass screening at Palais du Peuple. 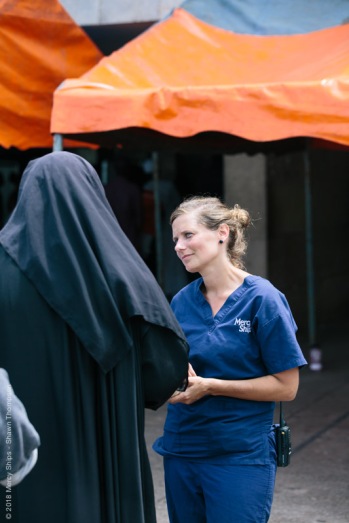 People lined up outside the Palais du Peuple to be seen by one of the screening nurses at mass screening. 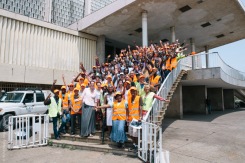 The group of volunteers who will be running the mass Pre-Screening event at the People’s Palace in Conakry.

James has started in Pre-School 2 which means he attends from 8am-12pm 5 days a week now, which he absolutely loves. He has 5 other classmates which makes for a pretty good teacher/child ratio! He has a lovely new teacher this year, who is French, and who one of his friends describes as “beautiful”!

We have more little people on board than usual at the moment and there are currently 8 lovelies who attend the nursery. Unfortunately there’s no nursery teacher, but myself and the other Mum’s take turns to watch each others kids which means I am able to nurse in the Outpatient’s department two mornings a week, which I love.

We’ve had a chance to visit a “playground” in Conakry, the first time we’ve seen anything like it in any of the West African countries we’ve been to. At home we used to visit playgrounds a lot, but when you live on a steel ship in a dirty, noisy port, it’s not so commmon! The playground was muddy, dirty and extremely unusual but surrounded by trees and even had some carousel rides! It was a fun way to spend a Saturday morning.

We’ve also visited an island near the ship and spent a wonderful day in the crashing waves of the Atlantic ocean which was lovely. It was great to hear the sounds of nature, as opposed to air conditioning (although we’re very grateful for ac!) and the ship generators. We’re hoping to visit again when rainy season finishes.